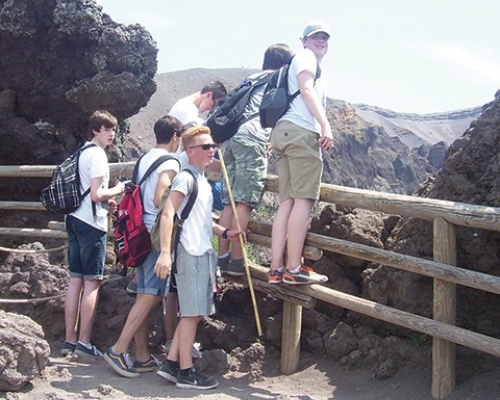 After a two and three quarter hour flight to Naples we eventually arrived at Solfatara, a shallow volcanic crater at Pozzuoli, near Naples. Click photo to read more from Katie Adams, Terri Whittington and Amy Bateman and view the gallery.

After a two and three quarter hour flight to Naples we eventually arrived at Solfatara, a shallow volcanic crater at Pozzuoli, near Naples...

When we were there we walked around different parts of the crater and stood inside it. We noticed the different temperatures in various places and were fascinated by the restricted areas which contained bubbling mud and the start of a new crater. We had to jump as a group to hear the echo under our feet where the rock had blocked the crater. The stronger boys in the group helped Francesco, our tour guide, to pick up rocks and throw them to witness how easy the sulphuric rock broke. We gathered around Dante’s inferno, a man made sauna and volunteers got the opportunity to see how hot it was inside.

On the second day we climbed Mount Vesuvius and stood around the crater where our tour guide, Emanuel, informed us of the characteristics of Mount Vesuvius and gave us an insight into previous eruptions and what would happen if it erupted today. Our visit to Pompeii showed us the impact of the eruption in AD79. We had the chance to stand in the amphitheatre where gladiators fought in battles. We saw the thirteen casts of farmworkers who were engulfed by the eruption in the garden of fugitives. We also walked the streets of a once popular town and sat in the theatre where the people of Pompeii would have enjoyed evenings of entertainment.

On the third day we visited Herculaneum which was covered in mud after Vesuvius erupted. We saw the three hundred skeletons in the boat house, sat in the baths and stood in what was the middle of the swimming pool in the gym next to a bronze fountain. On our last day we drove for two hours along the Almalfi coast. We saw Positano, coastal features and Sophia Loren’s home. When we arrived in Almalfi we went into the cathedral of St Andrew. Inside it was beautifully decorated with paintings and holy statues as well as the relics of St. Andrew. After this we went to the beach to enjoy the sun, swim in the sea and play volleyball.

Overall it was an amazing trip. We thoroughly enjoyed it and would recommend the trip to other students studying GCSE Geography!